5th November 2013
Update 2015-12-23: Updated vocabulary links and added a few more.
This article is designed for ESL learners with intermediate to advanced levels of English. Some words are linked to online dictionaries (usually for ESL learners like the Cambridge Business English Dictionary), with definitions and/or sample sentences. Some links go to online encylopedias and articles for more information. References used for the article are listed at the bottom of the page.

INTRODUCTION
In one of my Business English classes, the case study talks about two fictional car companies, "Elite Motors" and "Empire Motors".

But from the context it's clear this case study is based on two real companies and a real acquisition: when Germany's BMW took over Britain's Rover.

POLITICS AND BUSINESS IN A DEMOCRACY LIKE BRITAIN
For those of you not familiar with this story, or life, business and politics in the West or Britain, let me give you some background on that situation.

The UK's political system is a competitive multiparty democracy. Political parties compete against each other to earn the support of voters, and in that way they win elections and get to govern the country.
In most democracies there are two general (and opposing) tendencies in political opinion that compete against each other:
In Britain since the 1940s, the two biggest political parties in Britain have been the Conservative Party and the Labour Party, with power alternating (changing) between them depending on which of them wins a majority in elections.
Labour have a tendency of supporting government involvement in the economy whereas the Conservatives tend to prefer reducing government involvment in the economy. The two parties compete to win elections and implement their policies.

Before the 1980s, governments (mainly Labour but to a lesser extent the Conservatives too, as well as some from another party, the Liberals) had created government-owned services (such as utilities like the electricity and telephone systems) and also had nationalized ailing private companies [2nd definition], like troubled carmakers. They felt it was necessary in order to save jobs. They felt if they didn't save jobs, they would become unpopular with voters and so they might lose the next election to an opposing party.

In the 1980s, after a long period of economic decline in Britain, a new Conservative government was formed after they beat Labour in an election. The government was led by Margaret Thatcher.
Thatcher believed that the government should get out of business. She and others felt that government ownership did not really save jobs; they felt that government was bad at business and they felt that government giving money to support failing companies took away money from the rest of the economy. And so the government began a campaign of privatisation: selling off state-owned enterprises.
ROVER SOLD TO BAe
In 1988, the government sold off the state-owned car business (formerly called "British Leyland", later "Rover") to British Aerospace (BAe), which was itself a former state-owned company. Later Honda took a 20% stake in Rover (with BAe remaining in control) and there was a strategic alliance between Rover and Honda, cooperating on things like technology.
BAe owned Rover for several years, but the truth is, it never really wanted it. BAe was an aerospace company. It had only bought Rover under pressure from the British government, which itself had felt political pressure to make sure that Rover went to a British, not a foreign, buyer. Voters and the media had made it clear that they wanted the car company to stay British.

So BAe, not intending to keep Rover, didn't invest enough in it (and nor had governments before it, because of a lack of money). For example, a car company must release new models every few years. If it doesn't, people will feel that the company's models are old and customers don't want to buy "new" cars that are already out of date. And it takes several years of development (and lots of money) before you can produce and sell new models of cars.
ROVER FOR SALE AGAIN
In the car industry at the time, many people felt car companies needed to be as big as possible, to achieve economies of scale. They felt medium-sized car companies could not continue to exist independently. BAe was not committed to investing enough in Rover to make it a giant car company. So BAe wanted to sell off Rover. But it didn't really tell the world that they hadn't invested enough in Rover and that Rover was not a success. That wouldn't get them a good price.
Honda assumed it would be the preferred buyer to take over Rover, as it already had a stake and was in an alliance with Rover. Honda's strength in the Asian and North American markets would complement Rover's presence and capacity in Europe and the Commonwealth, and make Honda big enough to be a top-level global car company.
But BMW's chairman Bernd Pischetsrieder was worried that BMW was also too small to remain independent. He saw an acquisition of Rover as an opportunity to expand BMW from a medium-sized niche market producer of luxury sports cars into a major player in the global auto industry, producing a full range of different models and styles of car.

Not appreciating the full difficulties of Rover (perhaps because of insufficient due diligence [2nd definition], optimism on his part or reticence on BAe's part), he convinced the board of BMW to make a generous offer of £1.7 billion for Rover.

Bernd Pischetsrieder, CEO of BMW 1989-1999. Photo by Stuart Mentiply, Wikipedia.
And so BAe sold Rover to BMW, alienating Honda.
BMW'S OWNERSHIP OF ROVER
It seemed like a victory for BMW. But there were problems. The delay in developing new models when owned by BAe meant that BMW faced the problem of investing a lot of money for years before getting a return on their investment. In the meantime, Rover's models were already old compared to other companies, and so fewer and fewer people were buying Rover cars. They even "facelifted" their cars, giving old models a new look.
Rover might have had a chance of developing new cars more quickly if it had still had access to Honda's technology. But the sale to BMW had ended that strategic alliance.

Moreover, because of political sensitivity over nationality, BMW funded Rover with money but let Rover run itself. BMW didn't control what it was paying for. It remained hands-off so that the German owners would not be seen giving orders to a British company.

And so Rover kept producing cars, with BMW's money but their own ideas and management. Rover was developing good new cars but was taking a lot of time and a lot of money to do it, so the only models it could sell while developing new ones were the old ones. 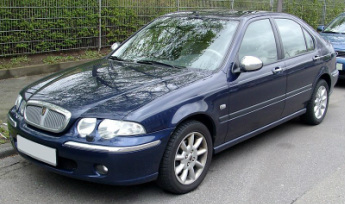 The Rover 45 had a new name and look but was basically an old Rover 400 with a facelift and name change.
ROVER (AND BMW) IN TROUBLE
So Rover was costing BMW a lot of money in two ways: Rover needed money to develop new models AND Rover was losing money because fewer customers were buying existing models.

Some in BMW and Rover thought that they could get money from the British government to help. If Rover failed, many people in Britain would lose their jobs, and in a democracy, unemployment is a sensitive [2nd definition] political issue.
The government was now run by Labour under prime minister Tony Blair. But Labour had changed over the years, in their efforts to beat the Conservatives in an election. Labour had moved more towards the centre, moderating its economic policies, which were now closer to the Conservatives'. Even though some in the Labour government thought that it was necessary to support Rover (i.e. give or lend them a lot of money), the choice was made not to give BMW/Rover all the money that they were asking for.

BMW was getting weaker, mainly as a result of the Rover acquisition. Its share price was going down. With the share price so low, some people even thought that another car company could buy BMW.

What happened in real life was that those people in BMW who were worried that Rover would sink (cause the failure of) BMW convinced the owners of their worries. They gained the upper hand, and key figures connected to the acquisition of Rover, including CEO Pischetsrieder, were forced out of the company.
The new leadership of BMW took more direct control of Rover and also imposed a time limit: Rover had two years to fix its problems or it would be sold. These actions brought greater discipline to the process of developing new models. And one much-admired new model, the Rover 75, was produced. But the years and billions that BMW had invested in Rover were too much and the new model was too late. There were still many debts and Rover needed more money to complete more new models for the rest of its range.

So BMW sold most of Rover to another company for just £10 (as the price included all of Rover's debts too).
However they kept one part that they felt could be profitable for them and could fit in their niche of upmarket sports cars: Mini (still owned by BMW today).

Furthermore, they had separated another part, Land Rover (who made off-road vehicles and 4x4s) and later sold that to Ford for £1.8 billion. (Today Land Rover is part of Jaguar-Land Rover [JLR] and is owned by Tata Motors.)
Taking everything into consideration, BMW lost a lot of money from their ownership of Rover, but at least they prevented the loss of even more money.
THE AFTERMATH
After BMW sold Rover to a private consortium, things got complicated.

Rover was reorganized and renamed MG Rover, but it still didn't find success. It sold some of its technology to China's SAIC Motor 上汽 in order to have enough money to stay afloat. But it still went into administration (also see LAW at bottom of this page) after a buyout deal with SAIC fell through.

Rover was then bought by Nanjing Automobile Corporation 南汽 (NAC) who ended production in the UK and brought some production equipment to China. There was some dispute between NAC and SAIC about Rover's technology, but they came to an agreement and later NAC was itself [definition #2] acquired by SAIC.
As of 2013, SAIC is making cars using Rover's technology. However the cars don't use the Rover name, because BMW sold that trademark separately to Ford (and it is now owned by Tata and JLR). It produces cars under the Roewe 荣威 (Róngwēi) marque in China and restarted production in the UK under the MG marque.
THE UK CAR INDUSTRY TODAY
There are no longer any volume car producers that are British-owned, just small niche market producers. However, with foreign-owned companies manufacturing in the UK, Britain is still one of the largest producers and exporters of cars, selling about 75-80% of its production overseas.

Comments here
© 2013 This article copyright Giuseppe Longo.
Images are copyrights or trademarks of their respective owners.